The Blues Were Passed To Me Through The Blood

Born St. Louis, Mo, Marquise hails from a musical family deeply rooted in the Blues. He learned how to play guitar from his grandmother Lillie. He also played with his uncle Clifford, who was a major influence in Marquise’s life. For Marquise, Blues is his heritage and way of life. He spent his early teenage years in St. Louis mentoring under the late great Blues legend, N.E.A. (National Endowment of the Arts) Heritage Fellowship recipient and Grammy Award winner Henry James Townsend. Marquise’s talents have earned him performing rights with some of America’s most notable blues performers such as blues legends B.B. King, Pinetop Perkins and David “Honeyboy” Edwards (the latter two also N.E.A. Heritage Fellows). He has also performed at dozens of festivals, and has toured all throughout Europe.

During a visit to Clarksdale, Mississippi, Marquise was introduced to Sam Lay. Like other statesmen of the Blues, Sam took an immediate liking to Marquise and took it upon himself to help give Marquise’s career a boost by insisting that Chad Kassem bring Marquise to the celebrated Blues series “Bluesmasters at the Crossroads,” which has showcased a virtual who’s-who of the Blues at Blue Heaven Studios in Salina, Kansas. Marquise was an immediate crowd favorite, and was adopted by all of the elders of the Blues in attendance that year. His obvious talent along with his deep knowledge of the Blues and vast respect for his elders made it clear Marquise had something special, and Kassem signed him to a three album deal.

Knox’s debut album MANCHILD was nominated for a Blues Music Award for Best New Artist Debut. The album was recorded when he was 16 with world reknowned guitarist Michael Burks and his band. The release received worldwide acclaim, including Living Blues’ Best Debut Artist Award and a Blues Music Award nomination for Best Debut Artist. Marquise then recorded a direct-to-disc album while in town for the next year’s Crossroads. Marquise released his second album, Here I Am, once again recorded at the legendary Blue Heaven Studios in Salina, Kansas. It features Marquise and his band, with a little help from Wayne Sharp of Michael Burk’s band sitting in on B-3 and piano. Nine originals, and three reverent covers of Marquise’s favorite Muddy Waters tunes. 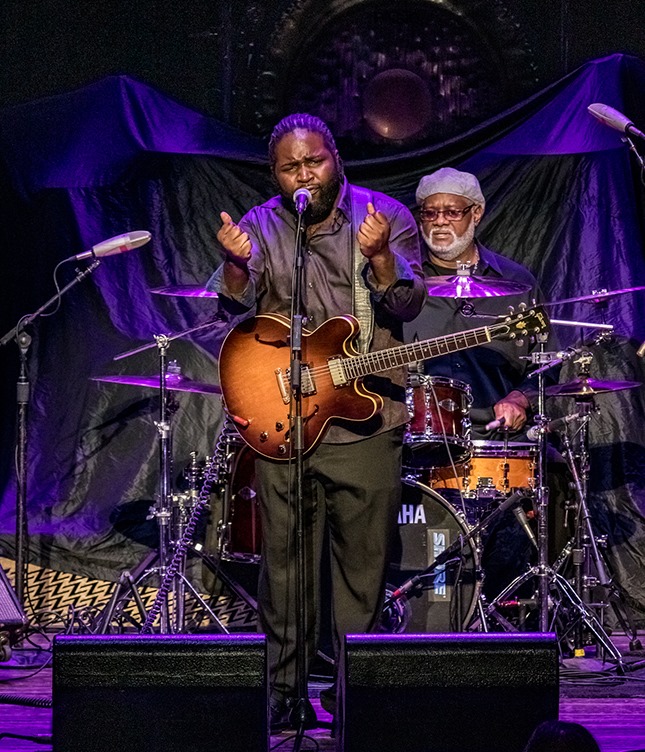 I think this excerpt from Here I Am’s liner notes says it best.

“When you listen to Marquise – 19 years old when he recorded this title – you get the sense that this is what those masters must have sounded like as young men. Marquise’s blues are so transparent and bare. It’s so easy to feel his music as totally legitimate. That’s above all what makes it so appealing. That’s what makes Marquise Knox special. He’s the whole package. A throwback blues master on the rise. Anybody believe in reincarnation?” – Jim O’neil